i didn't choose her. she's the only one i get to have. without her, i wouldn't really even exist. i spend immense amounts of time, money, and effort on her. many of my daily decisions revolve around her, and even when my control over her is compromised, she does everything possible to maintain herself. i suppose you could say that yes, i do love her. i am most certainly thankful for her. she's been with me since before i took my first breath, and will stay with me until my last.
i'm talking, of course, about my body: my corporeal, physical self. i could easily describe her; she's truly the blend of her earthly creators: like her Chinese mother, she's always been on the petite side and prefers Asian food, and like her Caucasian father, she's light in coloring and burns through that food pretty quickly. She likes being outdoors, having her heart worked out thoroughly, and can handle tropical heat but never snow. She has a few scars from accidents, got started on adolescence relatively late, doesn't have all her teeth (but you'd never guess), and functions best on 9 hours of sleep a night (not so practical). She likes adrenaline, has a curved spine and green eyes, and prefers to use her right side for physical tasks.
i've lived with her for more than thirty years, and although our relationship has been tumultuous at times, it is nothing compared to the people i know who have to negotiate with their bodies to function through chronic illness or other physical disability. i am often acutely grateful for her and how well she's held up. sometimes i feel like i early on made a deal with her: i will not abuse you with terrible substances or irresponsible choices, and you will let me make you strong and able to withstand strenuous but healthy usage. this deal has worked out pretty well.
i'm writing about this because i've been thinking a lot about my body lately. despite my intimate knowledge of her -- her likes and dislikes, her quirks and demands, her outward appearance -- she remains a complete mystery to me on the inside. i have never seen a meal digested nor a synapse fire. i've never witnessed the flood of hormones that are released when she's pulled into the arms of the man who loves her. and of course i have not been privy to whatever it is that has kept her from being able to have a child.
after a fair amount of thought and prayer, i've begun a course of TCM (traditional Chinese medicine) which include acupuncture and extensive use of herbs. the approach is holistic -- recognising the connections of mind and body -- and there is a part of me that trusts it more than the Western approach to having me come in only when something is "wrong" and then guessing how to fix it. i realise this is a simplistic view of things, and i am still under the care of my usual physician, but i felt that maximising my healthiness, both emotional and physical, was something i needed to do. because i have to give my doctor detailed reports about changes i observe, i've become even more acutely aware than usual regarding the fragile little package of carbon and water that is me.
i know i've been speaking in a somewhat detached manner about my body but i don't see "myself" as separate from her; i guess i've just been more frustrated lately about my inability to know and understand what is going on, unseen, under all this flesh and bone. and every month, the cycle of hope and guessing begins again. sometimes i long for translucent skin, like i could become a glass-bottomed boat. i want to see what is going on in there; i would like to see if my modifications of food/drink intake is doing anything; i want to see to where the blood flows; i'd love to see the moment my monthly ovulation occurs; i've seen it once in a documentary and it was amazing. but it's more than that. i want to ask my body questions; i want her to show me why today i was so hungry or what her endocrine system was up to that she felt so ebullient (or sluggish, or whatever) for no apparent reason or what her left middle trapezius is all irritated about. and every month when the cycle of hope, guessing, and then the bleeding again happens, i want ask her what happened in there that a new life didn't begin. but only she and her Creator knows. and ultimately, it's not in my control. i can just do the best i can to take care of her.
at August 16, 2009 2 comments:

Email ThisBlogThis!Share to TwitterShare to FacebookShare to Pinterest
Labels: body 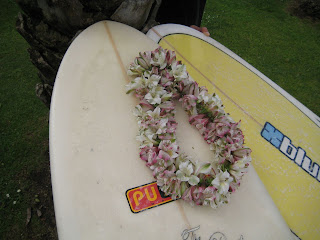 some of you have asked about our little ceremony we had on Isabela's due date -- here are some photos from that day. we got up early, went to the ocean, and paddled out beyond the break. Thomas had made a lei of flowers, which we cut apart and scattered on the waves. we said goodbye, watched the flowers float away, and surfed for awhile. it was very healing, and even a joyful time. especially meaningful was that also, there in the waves, Thomas also gave me a beautiful necklace with quite a backstory from Rome to commemorate the day. 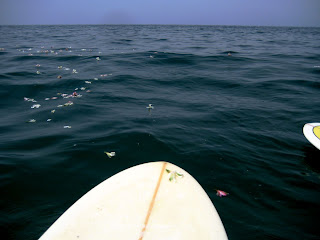 since then, i have felt a sort of slow dissolve of the hard spiky stone called grief that always seemed to be rattling around inside my heart. yes, i still have some days where the sadness or disappointment is more keen -- and i know i always will carry that spiky stone -- but i would like to believe that it will be easier for me to choose hope as the stronger emotion as i heal and move forward.
we thank you for the incredible outpouring of love and support that you have shown us -- you are truly conduits of God's compassion.
at August 02, 2009 1 comment:

in pregnancy loss communities,  when you have a living child after losing others, that child is called a "rainbow baby."  it&#...

some resources for pregnancy loss, grief, and healing

when your miscarriage isn't "finished"